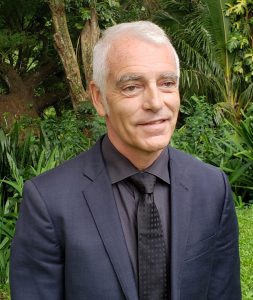 David’s interest in the law evolved over time. “I’ve always been fascinated with how the law works and at the same time, frustrated with how so many people seem to experience injustice in our “justice” system. It just took me a while to focus my efforts within the system rather than in the operational and policy arenas.”

He graduated from the University of Hawaiʻi William S. Richardson School of Law’s in 2014, after going to law school while working full time.

Prior to becoming a lawyer, David worked for the U.S. Coast Guard and the National Oceanographic & Atmospheric Administration (NOAA).

David credits events he witnessed in courts and jails in California as the catalyst for his becoming a lawyer. “It was shocking to see the difference in how people represented by an attorney were treated, as opposed to those without an attorney, not just by the court but by the police, by the prison system, etc.

We have created a system where most everyone needs an attorney at some point just to get a fair shake in the process, much less the result.”

David is a twenty-seven-year veteran of the U.S. Coast Guard, spending most of his career conducting or directing search and rescue, law enforcement, and environmental protection operations throughout the United States, Caribbean, and the Pacific Ocean Region.